I'm home and I am dragging ass.  We arrived home yesterday, had a good nights sleep, and am trying not to take a nap.  Hopefully, this won't be too incoherent...
First stop Johannesburg:
Because of wanting to use airline points (wouldn't have happened without them) and the actual start of our Rwanda/Uganda tour, we arrived on a Friday evening after a 15 hour flight straight from Atlanta.  Uneventful thankfully but still a real energy zapper.  Now of all places I do not want my hotel to forget to pick me up it's got to be anywhere in Africa.  Guess what?  Everyone was most helpful but come to find out my concierge at the Westcliff dropped the ball on every plan I made with him.  Fortunately, I was so tired I really didn't give a shit.  When we arrived at the hotel my new concierge took care of everything and comped the transfers....we also got upgraded to junior suites (both rooms).  Hubs and my suite had two full baths.  Which is a good thing because I always forget how much Hunter poops :)
Now a sidebar:  I have mixed emotions on zoos.  I do understand the need for conservation and education.  Not everyone can actually afford to see animals in their natural environment.  I do believe both my family developed a love for animals from our local zoos as children.  However,  I also realize how stressful and unnatural zoos are for the animals.
The following day (Saturday) we rested.  The Johannesburg Zoo was a five minute walk from the hotel so we decided to go.  It was a huge and quite lovely zoo.  Some of the animals looked quite stressed (polar bears - haven't seen one in years).  They actually did a nice job overall.  I was quite surprised to find horses and cows displayed but then, why not.  We also discovered chip on a stick.  We ate dinner in the Mellrose Arch district at Pigalle.
Remember what I said above about my husband?  Early Sunday morning, say 1:30 AM, he decided to lose his lower intestine.  For several hours.  Sigh?  We had made plans to visit Lion Park at 11:00AM and we kept them.
New sidebar:  Lion Park does breed lions but they do not "knowingly" sell to the canned hunting businesses.  The cubs in the Cub World are kept for one year.  They would not tell me what happens to them afterwards.  I do believe they are sold.  The other lions, when too old or problems start to arise, are sent to a game reserve to live out the rest of their lives. 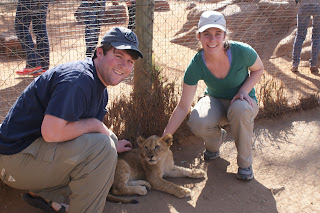 Cub World was awful!  They had two pens, three cubs each.  Maximum eight people were allowed in each pen for two minutes max.  Not sure how many people a day but it was crowded.  Made me feel ashamed that I was supporting this.  They were cute though.


Originally, we were to leave Joburg Monday at 3:30PM.  Life is never easy.  They cancelled our flight and rescheduled us for Monday at 1:15 AM.  Yes, I said AM.  Another friggin night of no sleep!  But we were headed to Rwanda and the start of our adventure...
Posted by Blue Booby at 11:48 AM