My sister shall be visiting Sunday until Thursday.

Based on her Facebook posts, I think she's ready for a little R & R.

Have a great week end!

Well like everyone else, I entertain myself via Pinterest.  I recently came across something called The French Five Piece Wardrobe.

The Vivienne Files does a nice job combining her Common Wardrobe with The 5-Piece here.


Yeah, well, I'm not getting the leather pants...those days have passed for me.  I also DO NOT need the black suit.  And instead of BF jeans, I go for bootleg every time.  I am not wearing black shorts with pasty white legs.  One last thing...instead of black it is NAVY for me.

Okay, okay.  I also threw in a pair of nude pumps and not only scoop neck tees but v neck tees as well.  I wear a lot of tees.  I have the grey sheath dress but still want a navy one.


Now I have all my basics except I still would like to get a nice navy dress and I am still looking for all leather, not suede, navy pumps.  Sigh.

According to this 5 Piece Plan, I am suppose to buy 5 new pieces in the Spring/Summer and 5 pieces in the Fall/Winter.  Replenishing basics does not count.  Whew.  Good thing, because I have to restock my white tees every year because of toxic sweat.

***Side Note:  I really like the Banana Republic's New Essential Vee.  I sized up one size for the best fit.  I also like Everlane's Cotton U Neck.  I did my regular size.  Neither are offered in navy at this time.  Damn them.***


This is the plan:

I know there is more than five pieces.  Baby steps.  Because I live in the south, I am claiming the skirt, top, purse, and loafers (I already purchased) as basics.  I really should claim the linen pants as basics too but I was afraid I'd get too much shit from you guys.  The navy blouse has not arrived so not sure if it is a keeper.  The sandals I love but can not pull the trigger.  Not sure if I can really justify them in my wardrobe.  Hunter is already making fun of my shoe quantity.  However, I am trying to move towards no more than 2 1/2 inch heels.  Did I convince anyone?  Anyone?

My Mournful Month of May

My Mournful Month of May

Thank God, it is almost over. 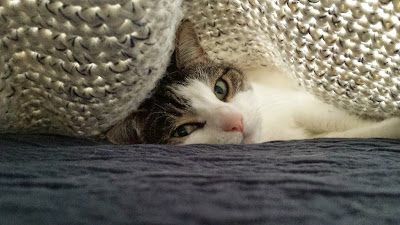 Baby kitty has been missing for two weeks.  She slept with me one evening and was gone the next day.  She is an indoor/outdoor kitty...one of the risks we all took.  Hasn't returned to eat.  Sigh.  I do not think she is still with us.  Of course, she left one week before Emily returned from college.  We had her for roughly nine years.  Although I affectionately called her Evil Kitty, she was a sweetheart and is missed terribly. 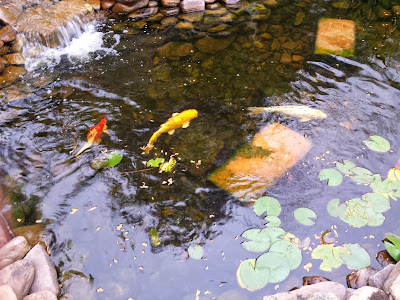 I have a lovely water feature with a waterfall, stream and pond, and six fish.  Well...I now have only one fish.  They, the professionals, came to clean out my pond.  The idiots did not think my beautiful fish needed an aerator.   ***Graphic Photo** 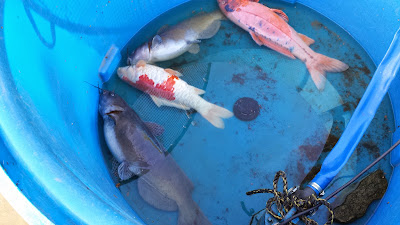 Three were dead when we found them.  One catfish was slightly vibrating, we tried rubbing him but he died.  One was very passive and I think pregnant.  She made it through the night but died the next afternoon.  The last, Lightening (yes, they all had names...we've had them since the kids were small), is the sole survivor.  He is quite traumatized.  They will be bringing me more fish later this week.  Cricket makes me sad.  My fish just make me mad.  Should never have happened.

Finally got him to have an MRI on his shoulder.  Remember when he fell off the horse back in August 2014?  You are suppose to have four shoulder tendons per shoulder.  He has two.  He will be having surgery Friday June 5th.  He shall be in a full arm sling for 4 weeks and then therapy for several months.  Hopefully I won't kill him along the way.  Wish me luck. 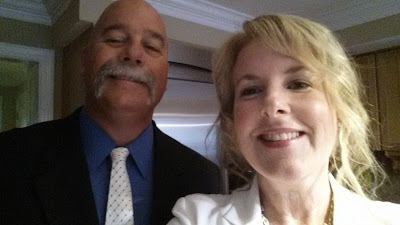 We ended our second honeymoon in Florence. 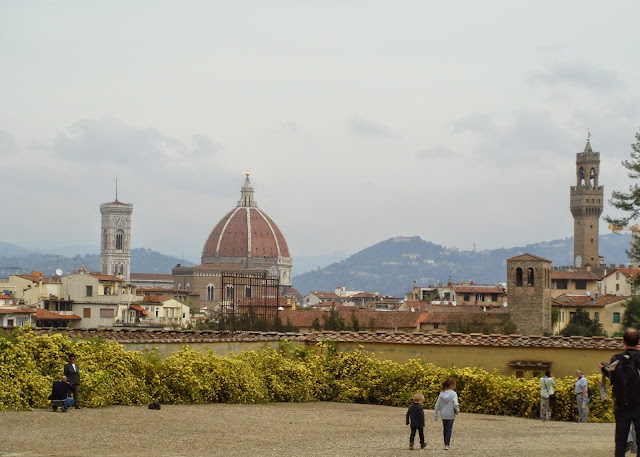 We went to the Duomo 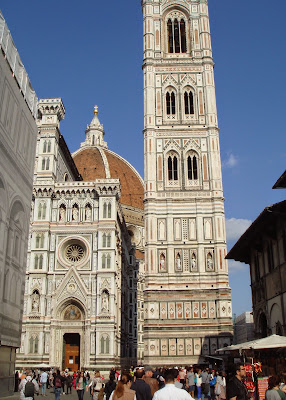 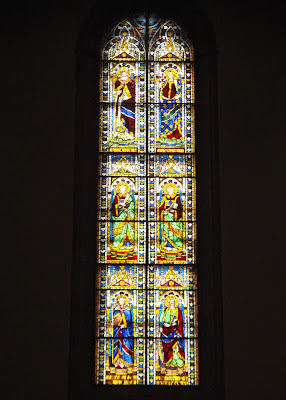 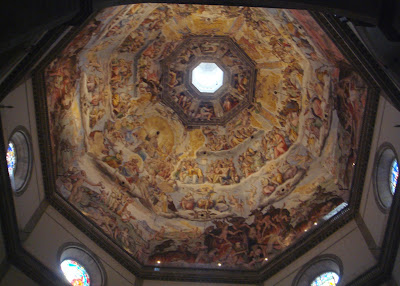 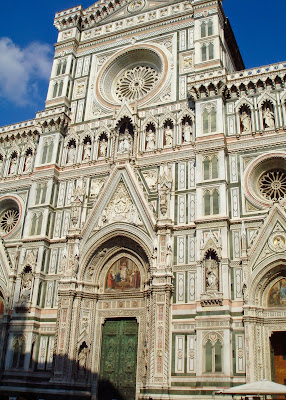 We saw THIS guy:

Went to the Pitti Palace to see how the rich people lived. 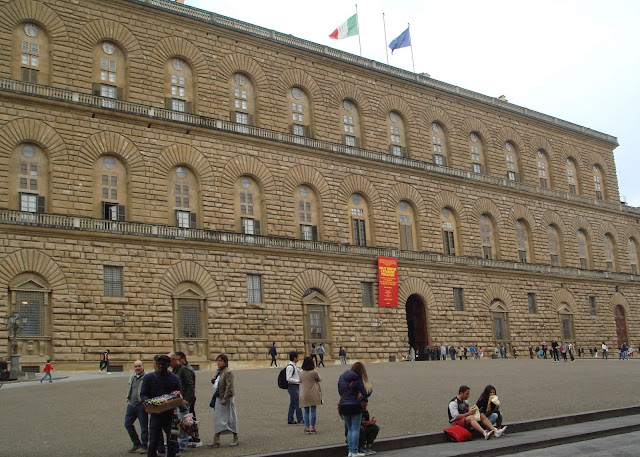 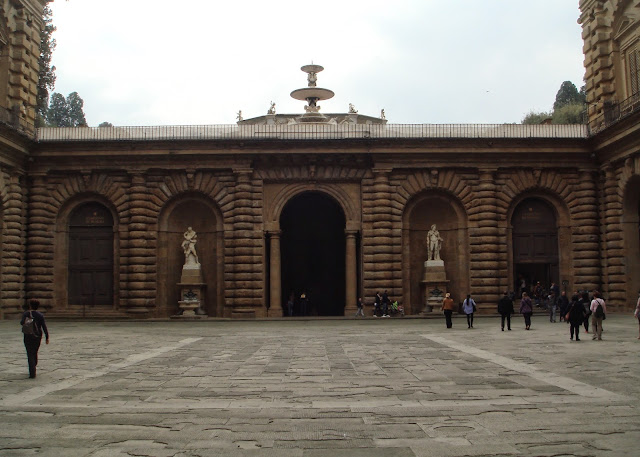 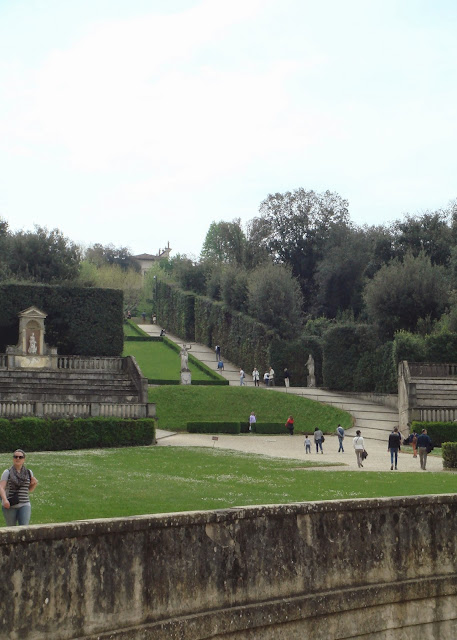 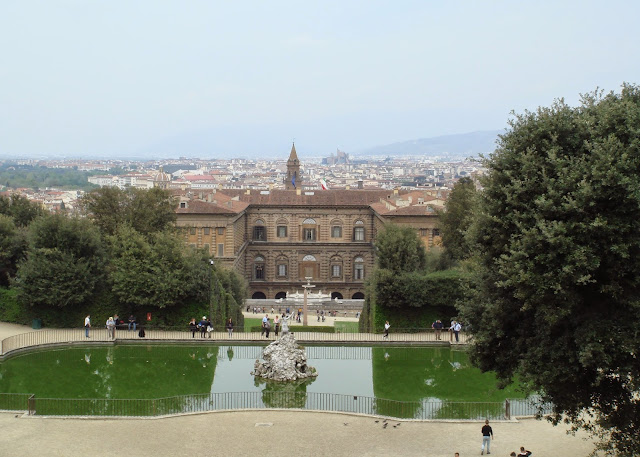 Saw and briefly spoke with THIS guy:

We are home and the honeymoon is over.  Loved it.  Hunter came back with a blue suede jacket and navy loafers.  Big Sexy wants to be a peacock.  I got wine, wine, and more wine.  I did get a beautiful clutch/wallet and a glass bead necklace and a scarf.  Did most of our shopping in Florence.

Back in East Tennessee and back to work.  Tyler is home for his last summer.  He is officially a Senior in college (egads).  Emily will be home next Tuesday for two months before she studies abroad in.......

Two hour train ride from Venice to Florence.  A one hour car ride from Florence to Tuscany.
Most of the trip was through a tunnel.  Had a fellow next to Hunter who took selfies, in all kinds of positions, the entire trip.  He also had his friends take pictures of him.  So annoying. 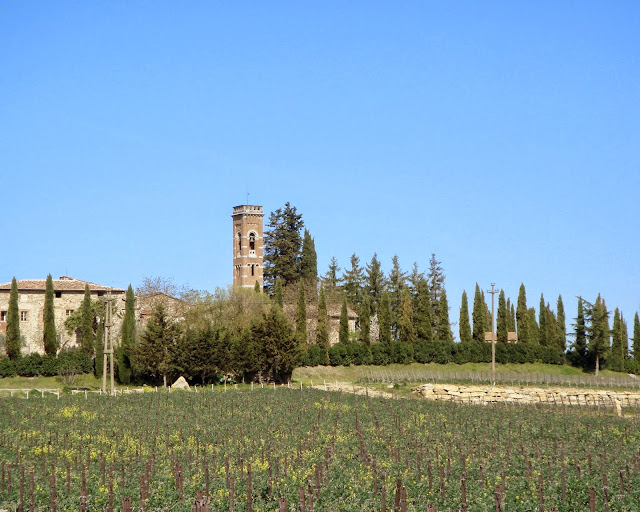 We stayed at Borgo San Felice.  They had just opened for the season the week before.  They hosted the Maserati Club.  Then we came and everything slowed down.  Maybe three or four other couples.  They were gearing up to host the Canadians and their Olympic staff/athletes (some fund raiser) for two weeks.  Beautiful place. 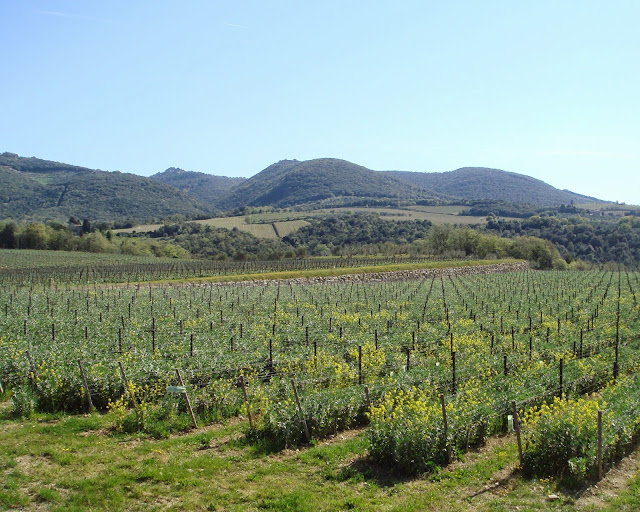 They make their own wine.  Our delivery arrived Wednesday.  Yay! 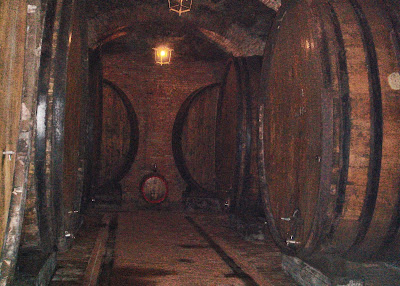 Visited a winery in Montepulciano.  Their wine hasn't been delivered yet. 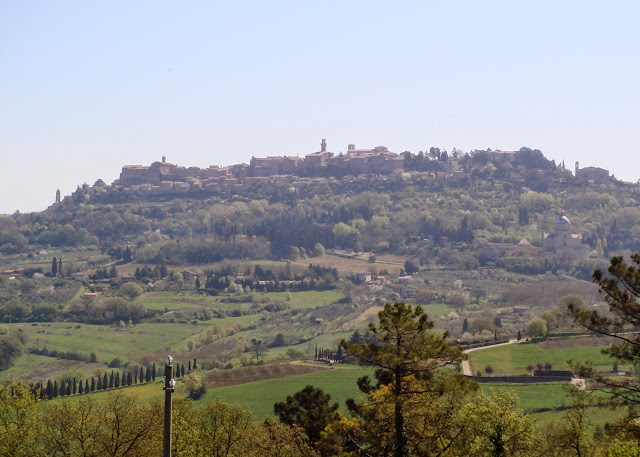 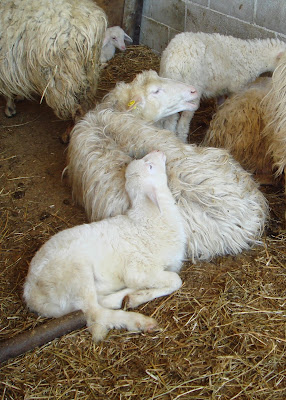 Visited a working farm.  They make their own charcuterie, cheese, wine, everything.

The farm is owned by a Swedish fellow who purchased the property twenty five years ago.
He had a pet sheep.  It ran up to us, just like a puppy would, baahed, romped, nuzzled, ate grass, stayed with us.  If I only could figure out how to take videos with my phone.  You guys would have loved it.  So cute! 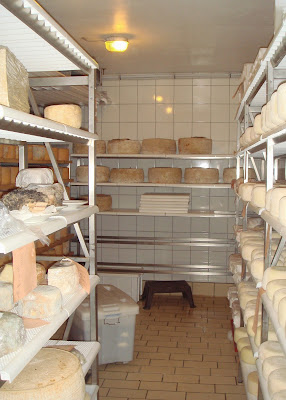 Hunter and I did a cooking class at Osteria di Passignano.  Just us and the chef.


We then toured the old monastery that they store wine in. 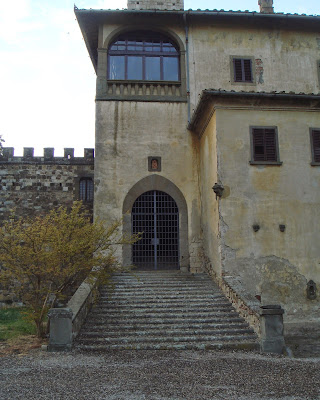 Then we ate at the restaurant, with all kinds of wine pairings, the meal we made.  Well....
The chefs prepared for us.  Terrific!  Oooh, and I have more wine coming!!!! 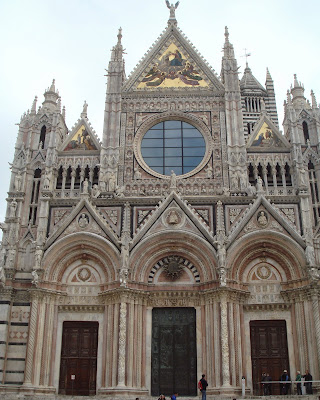 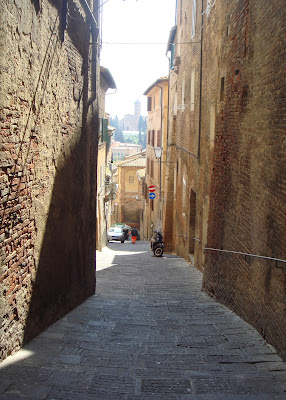 They run the Palio de Sienna twice a year. 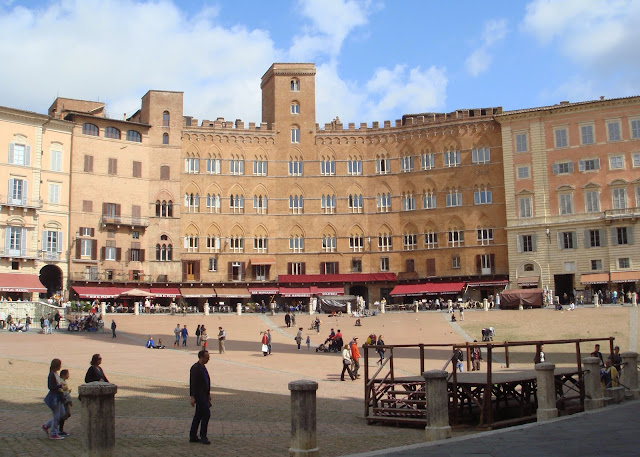 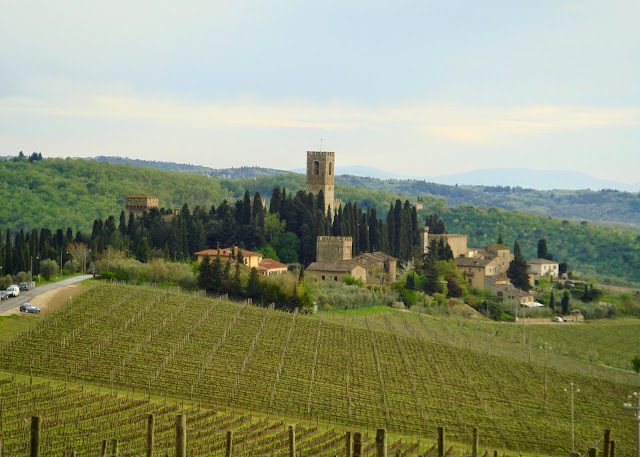 What did you think I was going to say?

Of course later I'll have

But for now,  V is for Venice.


We actually made it to Venice, Italy.  Looked just like the Venetian in Vegas.  Just kidding. 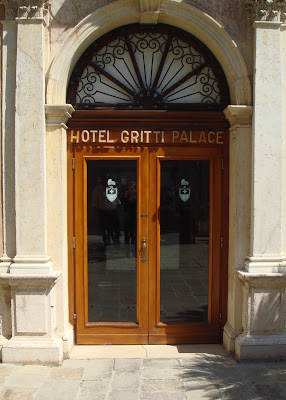 I just can not figure out these bidet things they have in the bathrooms.  Frontward or backward?  What's with the "special" towels?  They also had a sprayer between the toilet and the bidet.  This, I found out the hard way, is to clean the toilet.  I now know what it feels like to have your butt hole pressure washed.  Just saying. 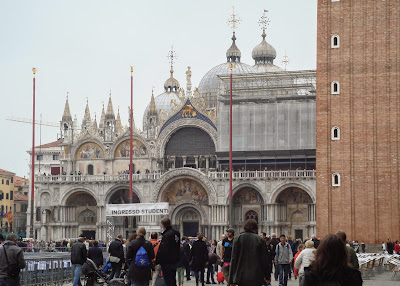 I brought the wrong clothes.  I needed a coat, boots, hat and mittens.  I had a jacket and socks. 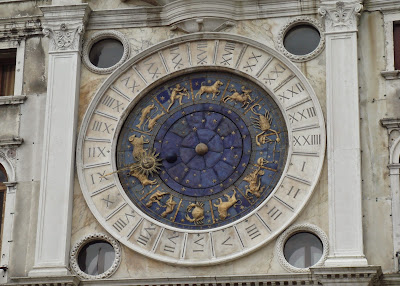 I have never been around such history.  Everything is old, old, old.

Speaking of that...I was amazed how many grandfathers were vacationing with their granddaughters. Lot of hotties with old guys. 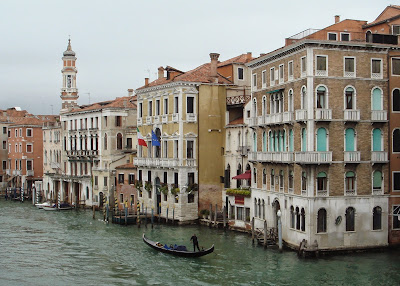 I did get assaulted by one big ass sea gull.
Hit me in the head while scooping up Hunter's bacon at breakfast.  He had left to get a croissant. 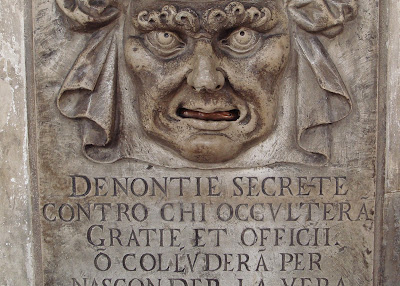 Saturday was a half day tour and then a wine lesson/tasting.  It was also the University graduation.

Sunday was a fun day.  Walked to the Peggy Gugggenheim Mueum.  Our wine lady is married to the curator.  Then walked along the water into a throng of people.  Initially thought it was the cruise boats letting off.  No, it was Venice's annual Walk the Bridges.  The people were everywhere.  Did Murano and Burano later in the day. 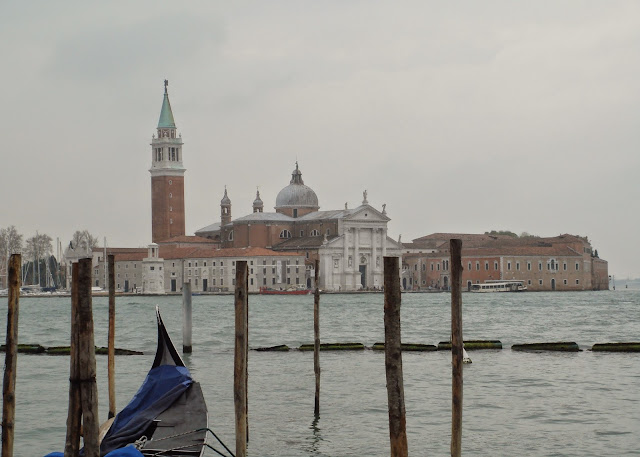