NYC - A Beautiful Day Thanks to TeaCups

And we're back to my adventure in the Big Apple.

Sunday, a week ago, we headed to Murray's Bagels for...yep, bagels.  Now I do like my condiments but why, oh why, do they have to put 10 tons of cream cheese on each bagel.  I got the traditional, bagel, smoked salmon, tomato, capers, and a butt load of cream cheese.  We actually found a table to eat at.  Meh.  Sorry New Yorkers, just as good as a Lenders bagel and Philadelphia cream cheese.  Gasp!

We took Emily down to the NYU dorms to meet her friend Alex.  Hunter and I had the day to ourselves.  Hey, I'm on vacation it's okay to drink before 5:00PM

Of course, we wanted to share it with every other New Yorker so we headed first to the High Line. 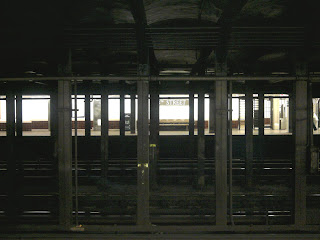 Waiting for our train. 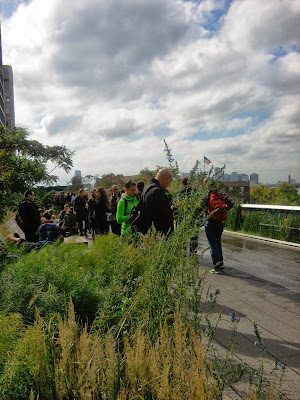 The High Line really is quite lovely if you took 90% of the people away :)  The thing to do is get your lunch, sit in the stadium seating, and watch the traffic go by.

And since we just love gobs of folks, we truddled over to Chelsea Market for more touchy feely fun with strangers.  Again, neat place just WAY too many people.

**My phone petered out on me.  I now have a new one but unfortunately I lost most of my pictures **

Now always a glutton for punishment, Hunter suggested we head to Rockefeller Center for lunch.  Hey, why not?!  The more the merrier.  Now the day before was beautiful and warm - we also stayed in the Grammercy/Chelsea area where the buildings are not as tall.  This day was just as beautiful and warm but the wind and shade made it rather chilly.

Now a wonderful blogger friend, Teacups, was very kind in offering us a few lunch choices since she is very familiar with the city.  These people were everywhere!  We did manage to find it though...

I had on my new J Crew tee which the hostess quickly commented on.  We sat outside, had the cheeses and charcuterie plates and a great bottle of wine.  The Columbus Day Italian American Parade was just down the street.  I could see the tops of the floats.  Always making friends, we chatted with the hostess.

Where are you from?  Tennessee.
Where are you from? Utah.
Have you seen any good shows on this visit? We just saw Book of Mormon.
What did you think?  Did you like?  It was hilarious.
I loved it also, even though I am Mormon.  I thought it was spot on.  Oh.

Hunter then preceded to tell her I thought Mormons were a cult.  Sigh.  She was actually a lot of fun and we thoroughly loved this little place.  Thanks Teacups!

Now on to the next place...lets keep this party rolling.

We got him this:

Off to Mario Battali's Eataly... 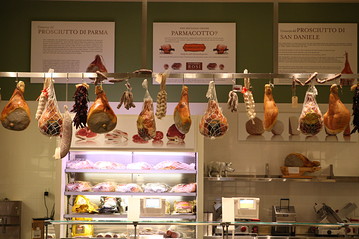 
These people are following us everywhere.  We tried to find another restaurant that Teacups suggested, La Birreria, but just could not find it amongst the throngs of people.  Gave up. We're quitters.

Well, that was a buzz kill so we headed back to the hotel.  But suddenly, something caught our eye.

How could we pass this up?!  Believe it or not, the prices were quite reasonable.  They even had a few bourbons Hunter had not tried.  New one: Larceny.  Favorite: still Buffalo Trace

Caught up with Alex and Em.  Went back to my closet of a room and finished my free bottle of wine.

Dinner was back at Chelsea Market at Buddakan with the girls. 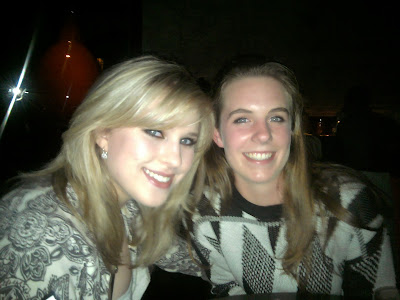 It was so dark and loud, Hunter gave up even trying to talk or listen.  They forgot our duck.  I got my dessert, ten minutes later Hunter got his, five minutes later Alex and Emily got theirs.  Food was good, atmosphere not what I wanted, services pretty bad.  I loved the concept and was really hoping this would work.  Took Alex back to her dorm and I was done.  Stick a fork in me.