Day 1 is just below if you need to catch up.

We were up and ready to go by 7:00AM.  Didn't want to miss any grazing time.  I tried to get Hunter to sit in that crazy ass chair/sofa (what do you call it?).  He said, "No."  They had all kinds of fruit, cereal, five types of juice, cheeses, charcuterie, oatmeal and hard boiled eggs.  Just a few nibbles before breakfast. Back to The Grill Room...free coupons for breakfast.  Had the Crescent City Egg White Omelet.  They should of called it Butt Load of Mushrooms with a Bit of Egg White.  Good thing I wasn't even hungry. 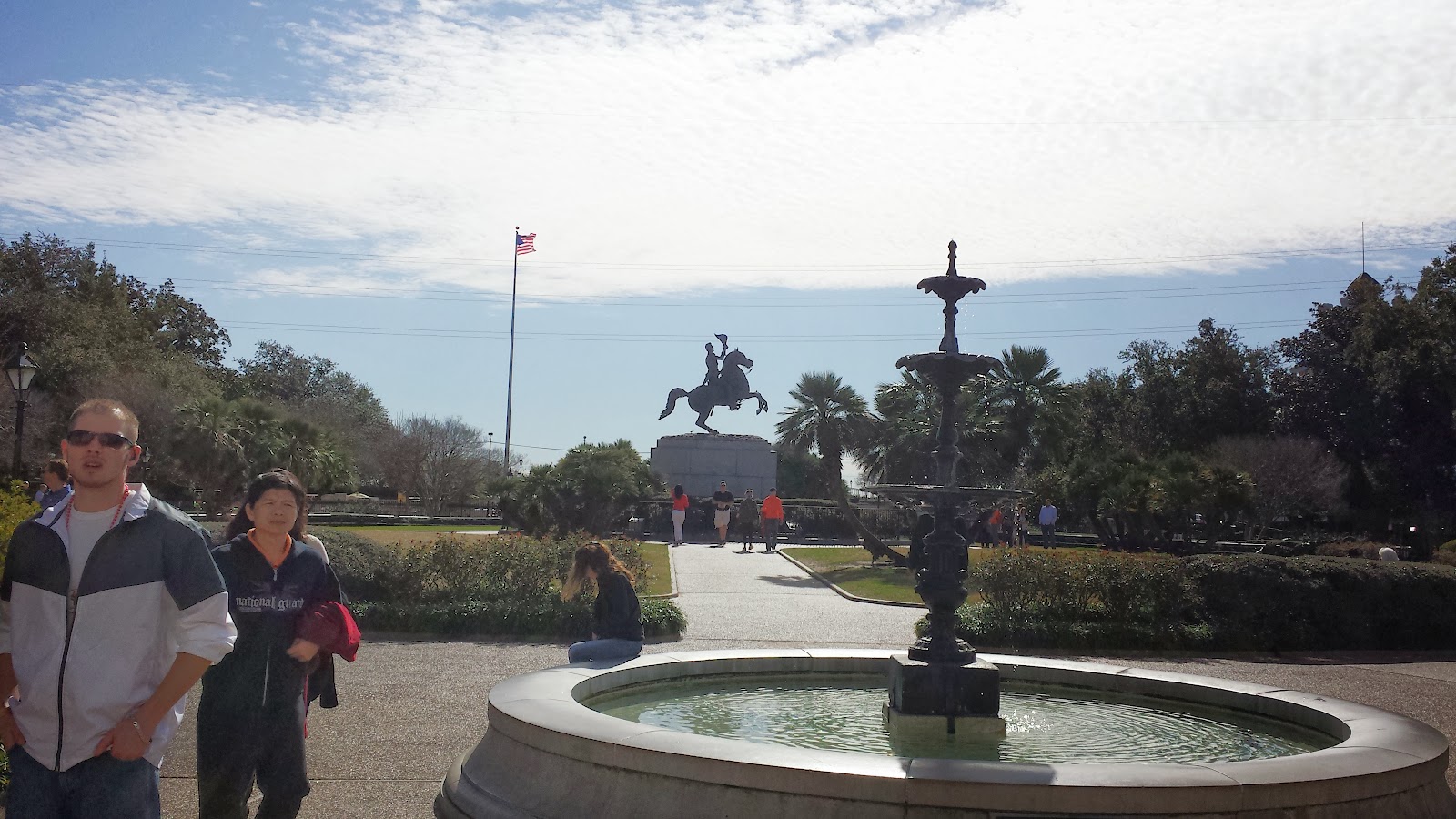 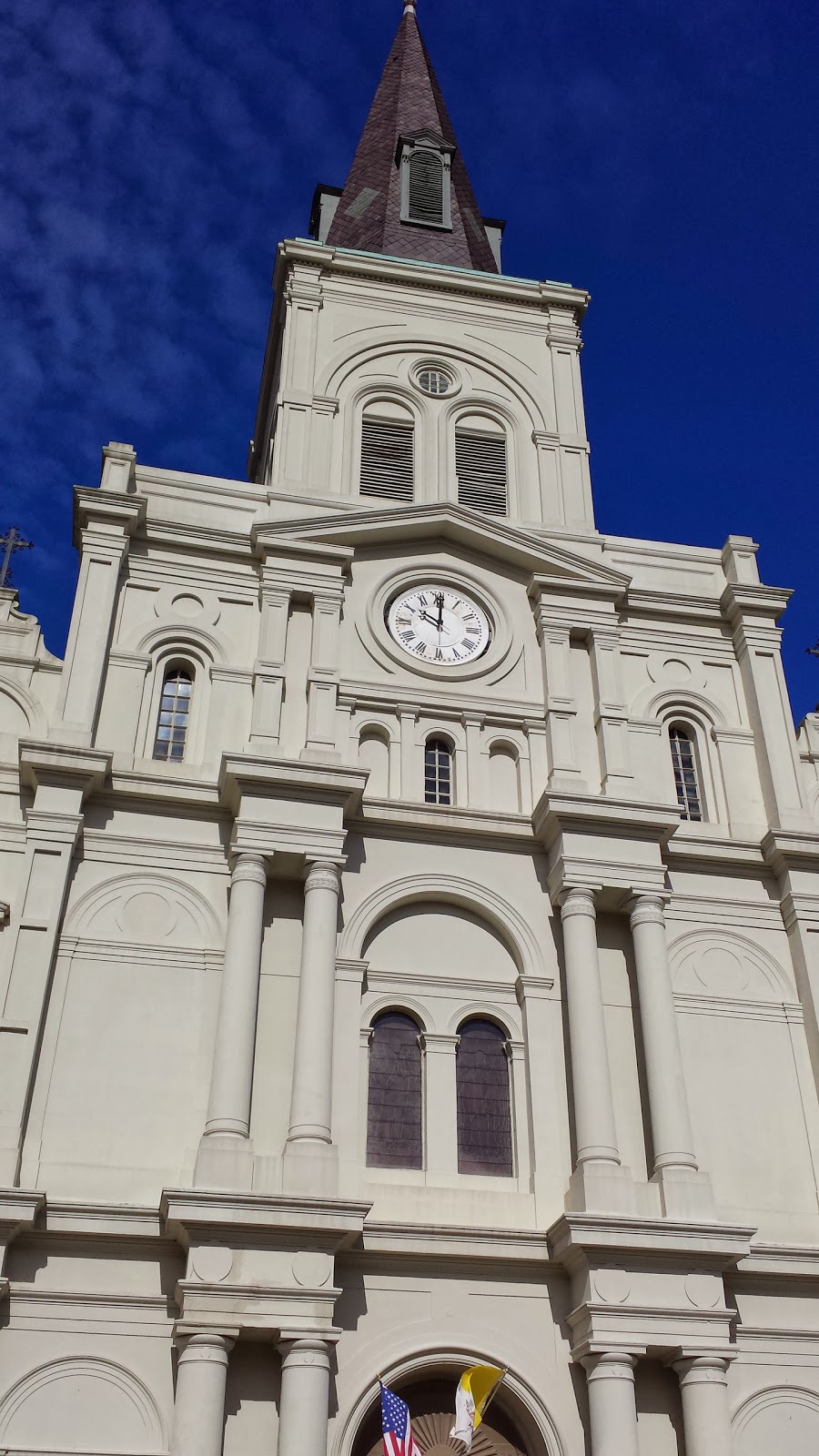 Well, I had decided to do a few things on my 1001 list while in New Orleans.  So let's get busy.  Found a cartoon guy to do Hunter and my caricature.  He made some comments about how large Hunter's head was that he would do me first so at least I got in the picture.  People started to gather, people started to wince, people asked if I had a good sense of humor, my mother made a very disapproving face, my father raised his eye brows, some young women commented that I was much prettier than that, I started to panic.  Then he drew Hunter.  People smiled, people chuckled, my dad gave a thumb's up.  Then....I got to see it.  NOT HAPPY.  Even the dumbest rock knows to make the chick look good.  Sigh.  And Hunter made me give him a tip too!!

Ever since I have discovered Bitchy Resting Face, I have told Hunter to stop making that face.  Now I am told by my beloved, "Stop looking like your caricature."

Now, I am heading to Atlanta to meet up with Ina for lunch.  Any other Atlantans that are up for it, e-mail me, I've got drinks and dinner available:) 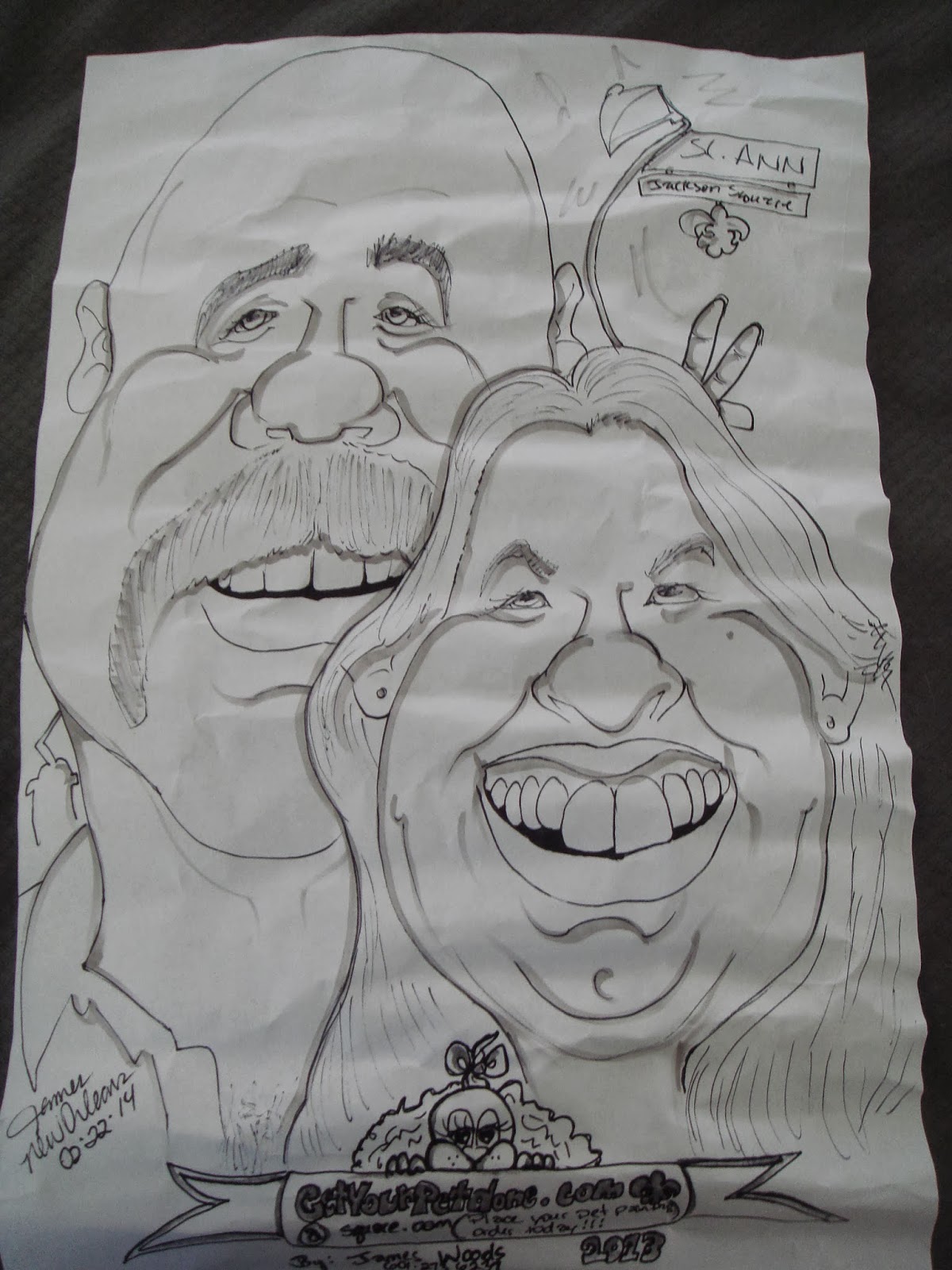 There were so many people we actually lost my mom and dad.  Of course my father refuses to remember to take his phone with him, so we really did lose them...or they ditched us.  Every city I go that has a "market" ends up looking exactly the same.  So we headed to Bourbon Street for art and lunch and drinks.

We got a muffuletta for later. 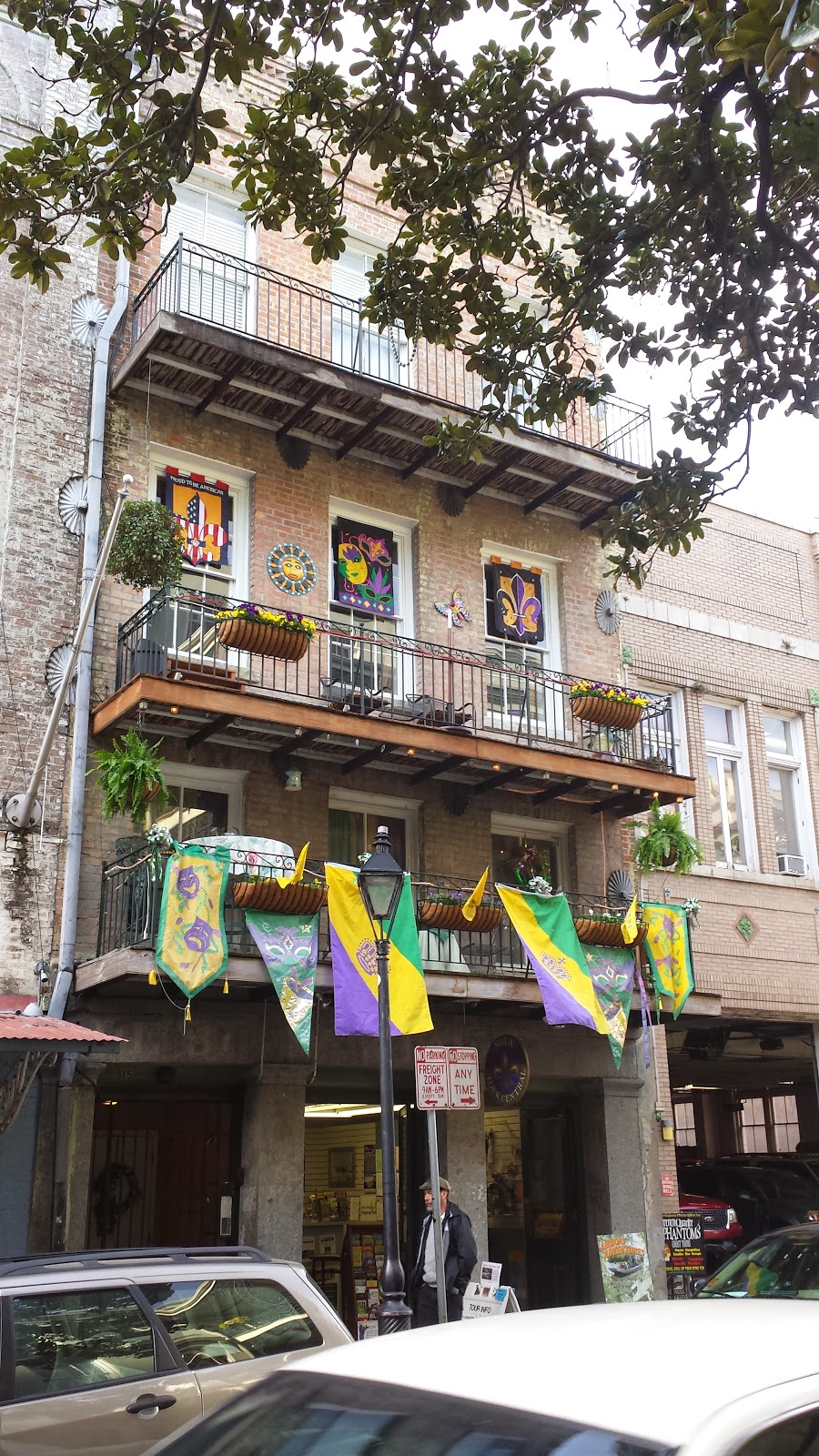 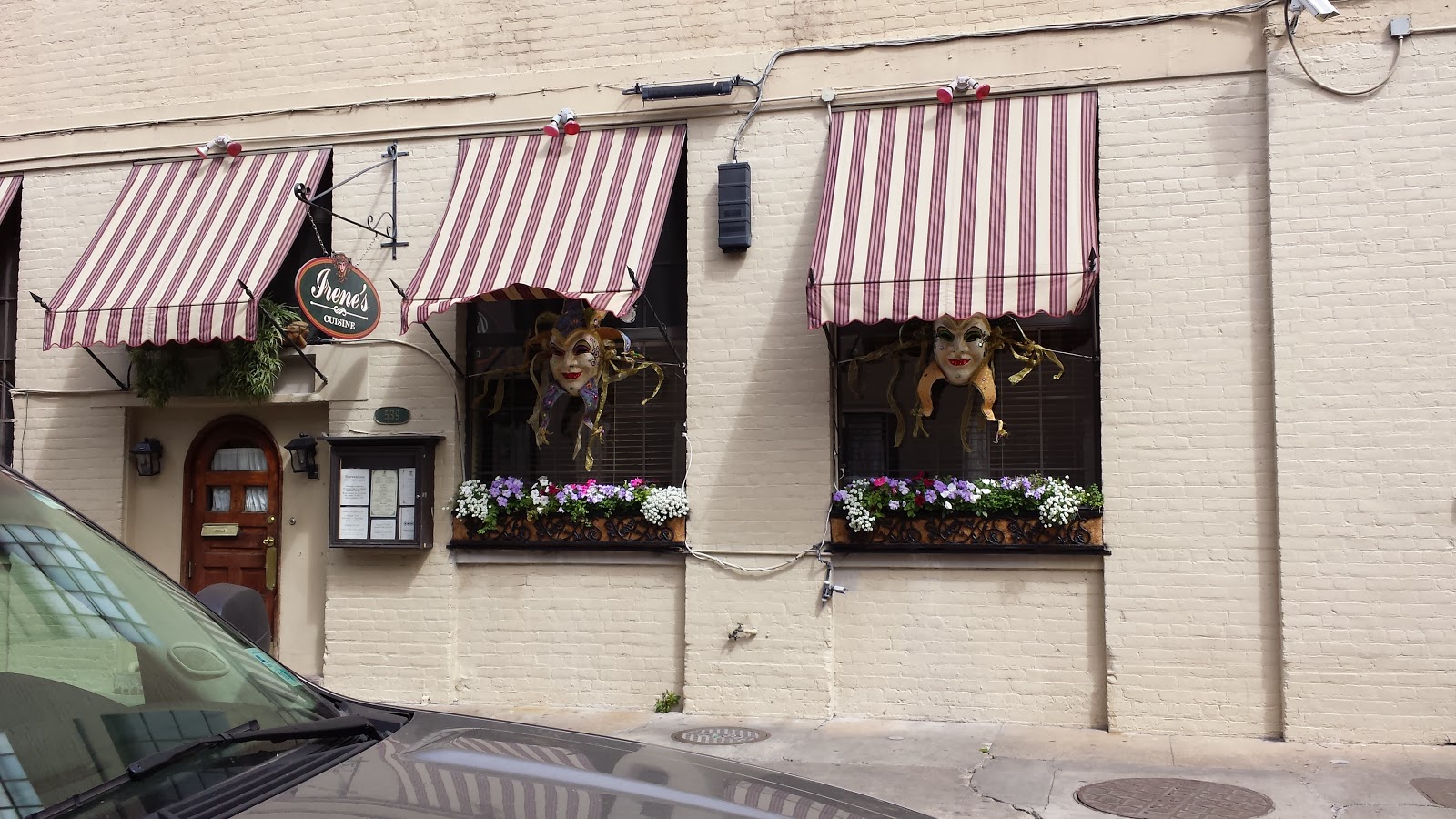 Green Goddess  Hunter swears it has one of THE best Bloody Mary's.  I had Rolled Uttapam with a spicy sangria. Hunter ate the muffuletta.  Why not?

This time we went to Cochon Restaurant.  Same guy just around the corner.  Need a reservation for both lunch and dinner.  We have a friend who played football with Hunter in high school who lives in  New Orleans.  We have not seen him for over twenty years.  He recently got in touch with Hunter a few months back so we met him and his wife for dinner.  Now Matt doesn't do Facebook so we were not sure if we would recognize him.

Hunter also works with a guy that goes down to New Orleans four times a year and always brings Hunter a muffuletta from Central Grocery.  He knew we were coming here and got us a bottle of wine, Hunter a double Blantons, and two appetizers.  So sweet.  Dinner was at 7:00PM, left at 11:00PM.  Had lots to talk about. 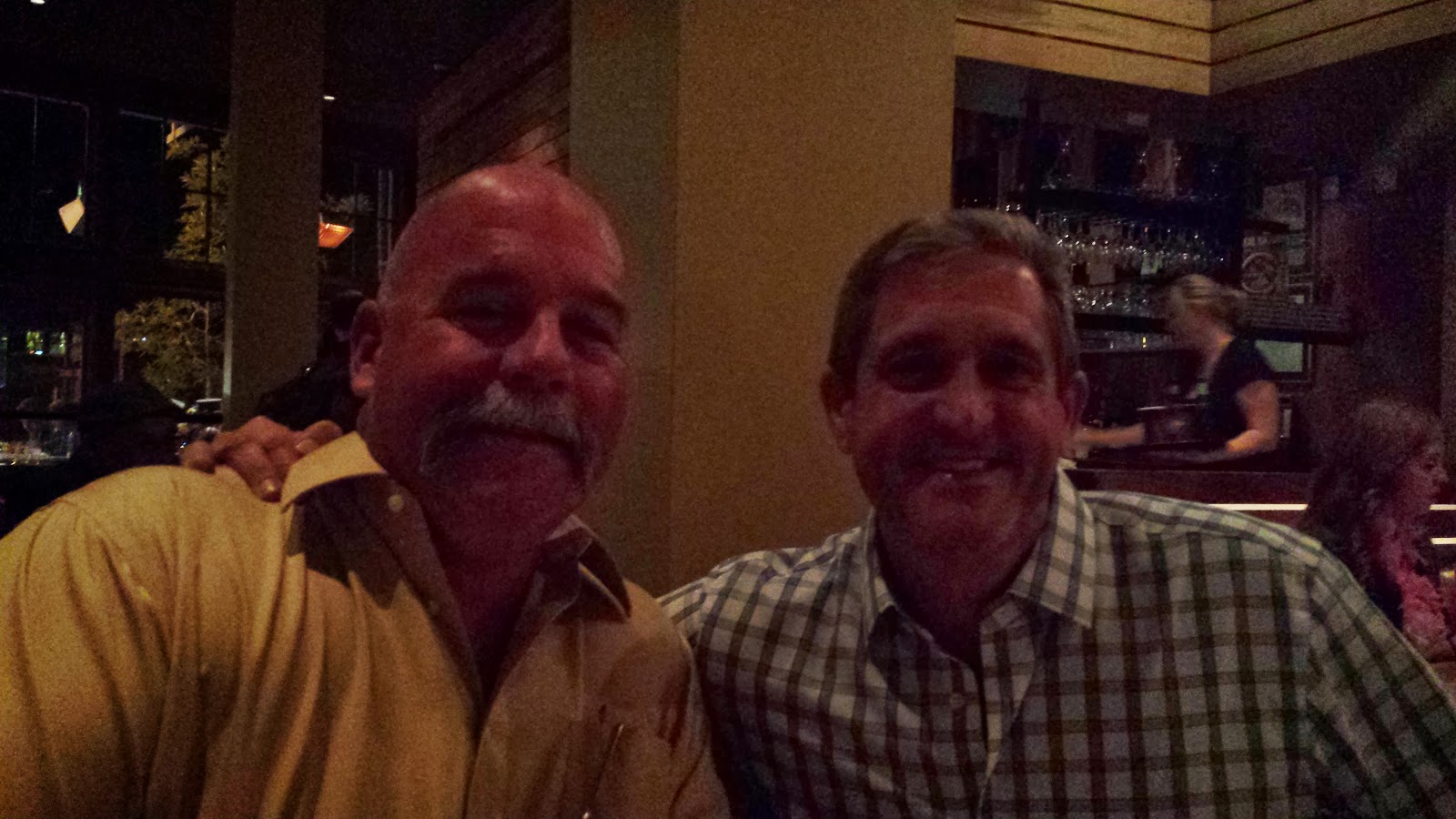 We opted not to go to Bourbon Street but no matter, the drunks were out and about.  I saw an older man with two young "ladies" stumbling about.  Did see a lady with bottoms and pasties...maybe she was part of a parade?  Since we were successful the night before, we decided to hit Harrah's Casino again.  Maybe we could find my folks.  We enjoy playing Craps.  Word to the wise, when drunk do not gamble.  One man was so drunk he could not even stack his chips let alone place an intelligent bet (is that an oxymoron?)  They were everywhere and Hunter does not have a lot of patience with them.

Beats the free swill at the casino.  Met a guy who does wine consulting/food pairing.  Lovely Cajun accent.  He kept feeding us different wines that he and his friends were drinking.  One of his friend's daughter used to baby sit for Johnny Manziel and wanted to know what we thought about Johnny.  This guy's wife was so drunk, she thought we were going to say bad things so she kept yelling across the bar for us to shut up.  Husband kept apologizing for her, but damn if I didn't have to bite my tongue.  Couldn't take it...I want happy drunks.  Off to bed we went.  Made it to 1:00AM.  Can you believe my parents stayed up longer than we did EVERY night?!