I am not one for cruises.  The rocking of the boat does not sit well with my stomach.  I started with the Carribean to see if I could handle it.  Moved on to Alaska.  Then decided I was ready to go to the Galapagos Islands.  Who wants to spend that kind of money just to be miserable.  For the Carribean and Alaska, I just used the wrist band for seasickness.  For Galapagos, I used the patch.  Make sure you have extra because they do tend to come off when snorkelling.  The last night was the worst for us.  We, me, hubs, son, daughter, dad, and mom, decided to do Celebrity Cruises because it is a bigger boat and I just felt I would be better off.  If you have no problems with seasickness, by all means go smaller.  We had a little under 100 people aboard the Celebrity Xpedition.  We did the 10 day Quito and Galapagos tour.  Actually ended up being cheaper than booking the rooms in Quito ourselves.
We did not do the Celebrity tour of Quito.  Instead we did a 3 hour private tour.  Not one guest I spoke with really enjoyed the all day cattle call tour after flying in the night before.  We saw them on our tour and they looked miserable.  Don't get me wrong, I am sure the guides and tour were fine but not ALL day after a long flight.  My parents didn't even go with us.  They did a night tour which they highly recommend.  We both used Metropolitan Tours here. 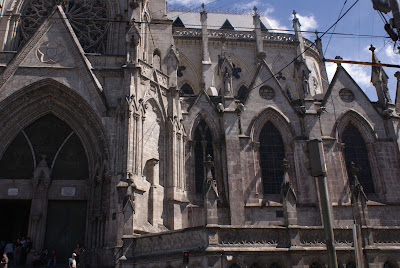 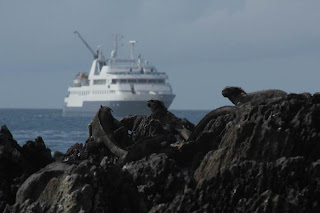 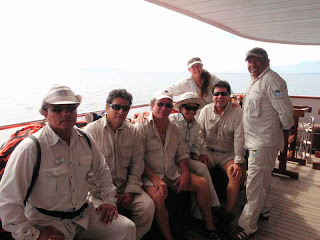 The Naturalists.  All very very good.
Couple of things I did not know that may be useful.  First, you can scuba dive.  You just need to make arrangements with a local dive shop...the ship doesn't have this.  Second, be prepared for large groups to be on this ship.  We had a group of 40 from a Texas travel agency.  They were, for the most part very nice, but they did "command" a lot of areas.  There was also a group of roughly 10-15 Japanese.  They were hilarious.  There was one other family (kids 10,13,15) and one boy (12) with his grandmother on the trip.  Lastly, the Naturalists are taking pictures while they are giving the tours.  At the end of the trip you get a CD with 100s of pictures including pictures of the guests.  They do a slide show the last night.  One Japanese man saw a picture of himself up on the screen so guess what he did?  He took a picture of the screen.
So now I will just show you pictures.  Enjoy. 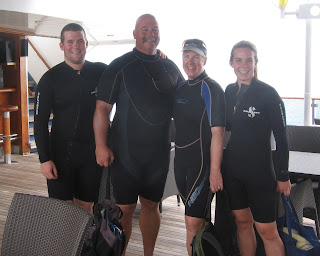 Ready for our first snorkelling trip.  Why did they ever get rid of girdles?  I was so excited until I woke up that morning and saw the sharks swimming beside the boat. 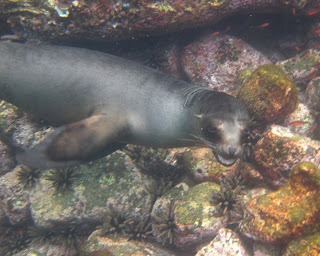 Snorkelling with a sea lion.  So glad I'm not a pussy. 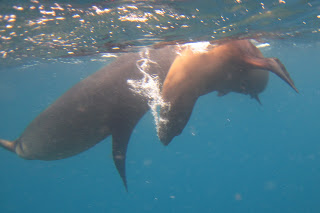 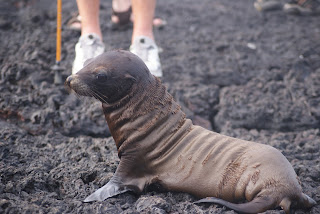 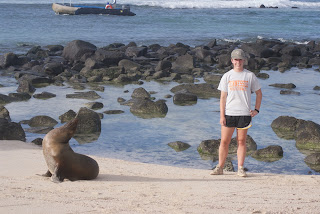 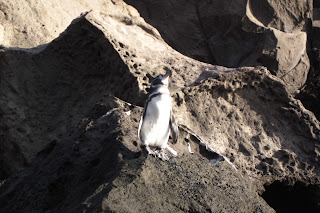 Penguin.  Supposedly I snorkelled with some, but I never saw them in the water just on the rocks. 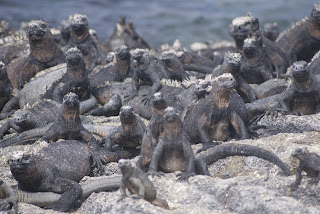 This island was wall to wall iguanas. 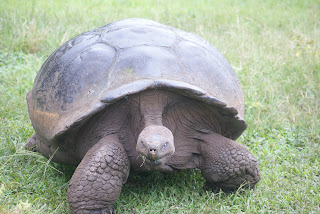 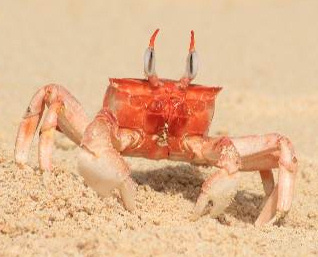 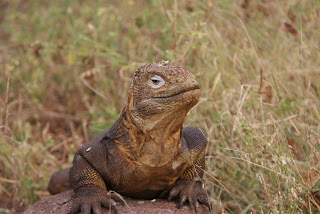 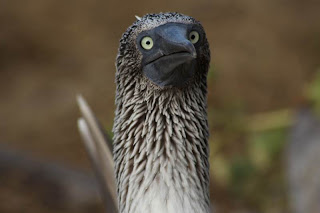 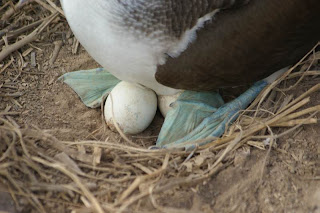 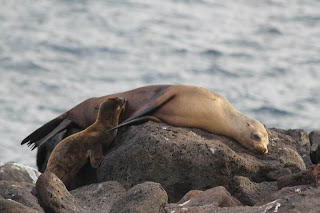 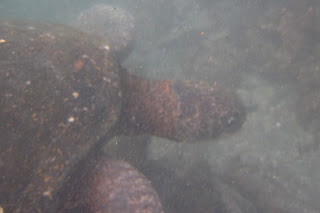 Snorkelling with a Sea Turtle 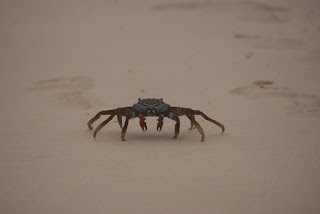 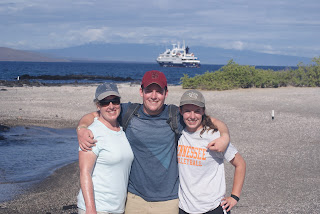 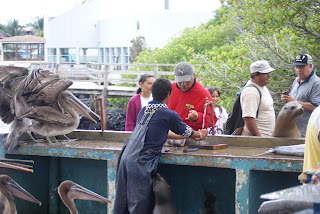 Do you see the sea lion waiting for his turn at the fish market? 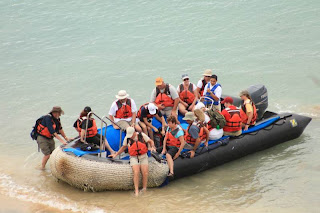 This is how you get off and on.  Yes, we are all on this boat.  Can you find us?  My mom struggled a few times.  Her knees just don't bend.  But she managed and is glad it didn't stop her from going. 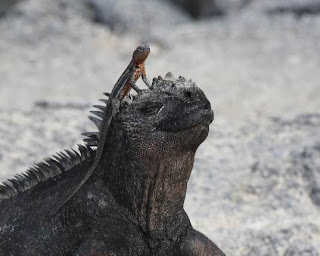 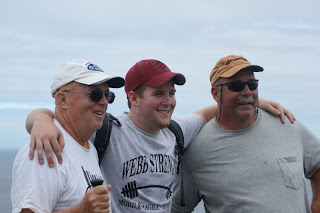 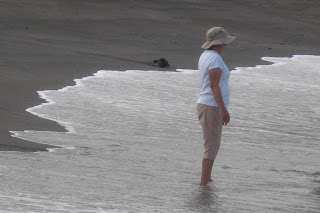 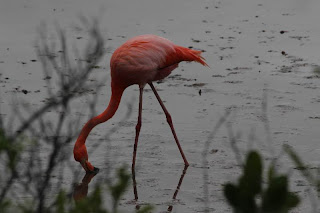 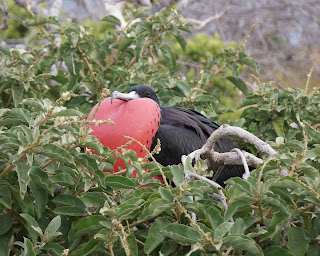 Frigate all puffed up and looking for love. 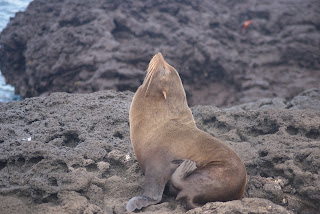 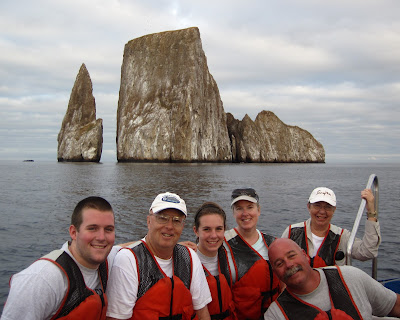