Twenty months.  One year and eight months.  It's been awhile but I thought I might just start blogging a bit again.  This is not my New Year's resolution, will get to that at a later date.  Just was thinking it was time.

I lost both of my pups last year. 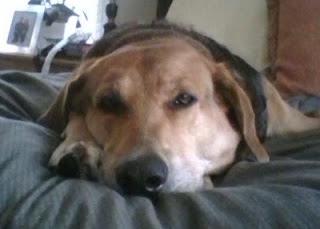 Minnie passed in April.  She was 15, had hip issues, and had an enlarged heart.  Every time she laid down her heart was pushed into her throat and the last days were so hard.  My favorite kid keeps changing, but Minnie was my favorite pet.  My dog completely.  She was mine and I was hers.

I still had Maggie. 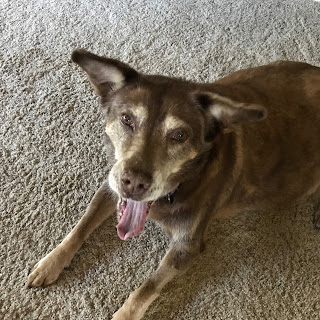 
They are not related but roughly the same age.  I had them for three weeks.  Emily graduated from college (Yay!  and she has a job!) so I got them a few weeks before she came home and then she helped for a week.  Let me just say, they were cute has hell but shit all the time.  Willie was fantastic.   He had personality, was fuzzy soft.  He used the litter box.  Birdie had a round tummy, big eyes, and white whiskers on one side of her face.  She shit everywhere and played in the litter box all the time.  After three weeks they were big enough to be adopted.  I decided I wanted a cat, not kittens.

Everyday I checked the website to see if they had been adopted.   Three days later they were adopted.  Time to get Hunter, Maggie, and me a cat.  Guess who was still at the pound?  Yep,  Willie and Birdie.  WTF?!  And they knew me...it was awful.  Thankfully Emily was there to keep me focused.  (they were adopted, for real, within a week). Ta da:

Got him in June 2018.  He is seven years, owner surrender, and was not neutered until we adopted him.  Kept him indoors for three weeks then it was time to let him go outside if he wanted.  He disappeared for one night.  Sigh.  Two weeks later he disappeared for five days.  I could not sleep, I was miserable, I was not worthy of any more pets.  We put out food, Hunter threw his poop that we had from the litter box all around our property.  He came home.  We also acquired two opossums who liked the food we put out.  He has never left since.

Late August, Maggie passed.  She had a tumor on her spleen that ruptured and she was bleeding severely.  She was 14 years old.  She was the last of my children's pets.  Her death was a bit too sudden and unexpected.

After Thanksgiving, I started looking fo a dog.  I wanted an large adult dog.  I got a medium puppy....
Good thing she is so cute.  She walks and stays with me in the woods.  She loves her toys.  She was secretly pooping upstairs.  Not anymore.  And she adores the neighbors dog Sunny (who has been visiting us for seven years).